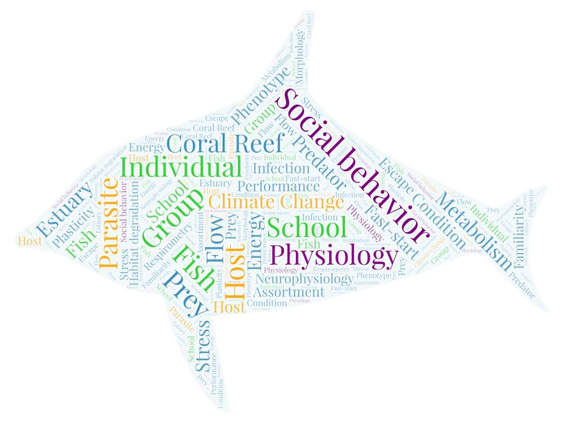 My research focuses on three areas that are key to understanding why animals behave the way they do: (1) investigating interactions between individual physiology and behavior in social species; (2) understanding how these connections may shift under biotic (i.e., group composition, parasitism) and abiotic (i.e., habitat loss, climate change) pressures; and (3) developing tools and techniques to test these lab-based findings under realistic field conditions.
1. How are individual physiology and behavior connected in social species?
For my postdoctoral training, I was interested in understanding the role that neurophysiology plays in behavioral phenotypes. My interest in this field was piqued by my work with the fast-start escape responses of shoaling fish. This behavior is modulated by anaerobic swimming performance, sensory stimuli, and neural control, and is typically mediated by a pair of higher order command neurons called Mauthner cells. My work was the first to show that group composition can mediate a defensive behavior that was previously thought to be hard-wired in the brain. Shoals composed of familiar fish reacted 10 times faster to a threat stimulus and exhibited a 50% faster motor output than shoals composed of unfamiliar fish (Nadler et al., in prep). I will be working with neurophysiologist Dr. Øyvind Øverli (Norwegian University of Life Sciences) to investigate how social context influences Mauthner-cell reactivity and individual neurochemistry.
2. How do these connections shift under biotic and abiotic pressures?
My past and current research focuses on better understanding how projected climate change (in terms of rising sea-surface temperatures, ocean acidification, and hypoxia) may shift the links between behavior and physiology in social species. To examine these ideas, I collected wild coral reef fishes and acclimated them to projected future conditions in the laboratory and tested how it impacts the “calming effect”, fast-start escape response, and the group’s swimming performance. Coral reef fishes present an ideal model system to test these questions, as these fishes are accustomed to limited variation in habitat conditions and therefore may be more susceptible to changes to their environment in the future than other habitat types. Social behavior is also an integral part of the ecology of many coral reef fishes. Therefore, any factors that alter the tradeoffs of sociality may drastically impact coral reef fish assemblages. While this work is ongoing, I published the first of these results in 2016 (Nadler et al., 2016 Conservation Physiology), where I found that the “calming effect” described above is maintained under projected future ocean acidification. This was a novel finding because it contradicted the common perception that the behavior of marine fish is universally retarded at elevated CO2 conditions.
Collecting fish on a reef using a barrier net (video credit: Shaun Killen).
Parasites are also another major stressor that animals must deal with. Infection status is known to alter the physiology and behavior of many species, and yet is largely disregarded as a major factor in ecological processes. My current work is using a ​brain-encysting, behavior-modifying parasite (Euhaplorchis californiensis) found in the in the shoaling California killifish Fundulus parvipinnis as a model system. This ongoing work, in collaboration with Professor Ryan Hechinger (Scripps Institution of Oceanography), examines how infection influences social behavior, individual physiology, predator-prey interactions, and fast-start performance in a range of contexts and throughout ontogeny in different host species.
3. How can we test these questions under realistic field conditions?
While we know that groups composed of similar morphological phenotypes maximize the benefits of social behavior, the composition of physiological and behavioral phenotypes within wild social animal groups remains a major knowledge gap in the literature. My frequent collaborator, Dr. Shaun Killen (University of Glasgow), and I contributed to a special issue of Philosophical Transactions of the Royal Society B (Killen et al. 2017), where we summarized the current evidence supporting physiological sorting patterns in wild social animal groups, and where the field should move into the future. I started the process of unraveling these ideas by collecting wild shoals of fish and classifying their metabolic phenotype. I found that individuals non-randomly associated with conspecifics of a similar metabolic phenotype (Nadler et al., in review Marine Biology). This work is also becoming more field-focused with devlopments in stereo-camera technology. A stereo-camera is a type of camera with two or more lenses with a separate image sensor or film frame for each lens. This allows the camera to simulate human binocular vision, and therefore gives it the ability to capture three-dimensional images or video. While in the past this technology has been prohibitively expensive, in recent years, smaller cameras with waterproof housings have been developed. My current work is developing ways to measure school swimming behavior and escape performance using this technology.